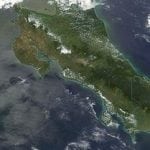 Weather Costa Rica. Costa Rica is a tropical country because of its proximity to the equator between 8° and 11° North latitude. The pleasant weather of Costa Rica, a combination of tropical climate with its mountainous system, is characterized by high temperatures and abundant rainfall during much of the year.

The influence of the two oceans, the Caribbean Sea and the Pacific Ocean, to the East and West, and the smallness of our country make the most of the elements of the weather do not submit large annual fluctuations. Temperatures do not vary much throughout the year and generally range between 14 and 22 degrees Celsius and the coolest months of the year are November, December, and January.

Costa Rica’s weather is classically divided into two seasons: rainy and dry. There is no summer or winter in Costa Rica, the sun shines here throughout the year and the rainy season lasts from May to November, with the months of December through April having little to no rain (dry season) and September and October being the heaviest rain period. Locally, the seasons were named by the Spanish colonizers, who compared them to their own Mediterranean climate, calling the dry months “Verano” or summer, and the rainy, grey and gloomy months “Invierno” or winter. It is interesting to note that some of the coldest temperatures are registered during the early dry season or “summer”.

Why Costa Rica weather is so different?

Why Costa Rica weather is so different? The main reason for the diversity in Costa Rica’s weather is the complex geography that creates varied climates and the various elevations at which different parts of Costa Rica are located. For example, Guanacaste has dry arid weather as it sits on the lowlands, while Montverde a highland city that is misty and foggy throughout the year due to its higher elevation.

The Central Valley with San Jose enjoys the best weather of Costa Rica and is tempered with a cool coastal breeze. In the highlands, there are hot days and sultry evenings. The weather of each region is different but remained relatively stable throughout the year, there are light changes depending on the time of “summer” (dry season) or “winter” (rainy season). “Summer” season usually from December to April and the “winter” from May to November.

Weather in the tropics is essentially a phenomenon of solar radiation and air circulation. Intense heat at the equator puts air in motion, and a worldwide pattern of winds is established. The most famous of these, for Costa Rica, is the north-easterly trade winds, known locally as “alisios”. These winds blow with considerable force from December to March and April. These winds, for example, are responsible for carrying moisture in the form of mists to the slopes of the Tilarán mountain range. These mists are what sustain the magnificent cloud forest ecosystem. 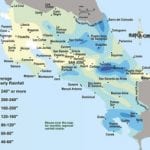 Weather Costa Rica Rainfall. Rainfall patterns in Costa Rica vary greatly in intensity across geographical areas. Some locations receive over 6 mts (18 ft) of precipitation per year, while others receive under 1.5 mts (4 ft). Most of the total rainfall for any given site (about 70%) occurs on less than 15 days of a whole year, and will often be experienced as days of a torrential downpour. Costa Rica may hold the world record for the number of rainy days at one site. Hacienda Cedral registered 359 days of rain in 1968.

The main change in the seasons in Costa Rica is the amount of rainfall. On the Pacific slope, the rainy season begins in May and runs its course until November. The rains usually occur during the afternoon or evening, so if this planning to travel to Costa Rica keep this in mind and enjoy the Sun during the morning. During July and August, there is a short dry season called “veranillos”. In the Caribbean, including the Caribbean region and the region North, definitely there is no dry season. In the coastal zone, however, there is relatively dry periods, one in March and April and one in September and October.