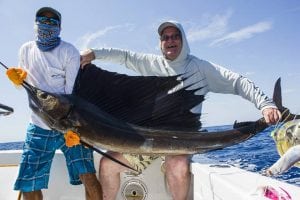 Marlin
Caught year ’round, these monsters arrive in huge numbers from mid-November through March. Pacific Blues, blacks and occasionally the striped variety are taken all along the Pacific coast.

Sailfish
Also caught year ’round, sails show up in big schools from May-August. Perhaps the most acrobatic of all deep-sea fish, sails often spend more time in the air than in the water.

Tuna
Peak months are August- October. Yellowfin and some Bigeye tuna are found well inside the Santa Catalina Islands near Playas del Coco. You can frequently find concentrations of 40- 60-pound tuna, though 200-pounders are caught ‘year round.

Dorado
Also known as mahi-mahi, the Dorado is one of the most exciting gamefish you can catch on light tackle. A hooked dorado may leap or tailwalk, first in one direction, then another. It’s been estimated that they can reach speeds of 50 mph. A colorful, hard-fighting fish that makes delicious eating, dorado are plentiful from May-December.

Wahoo
Peak months are May-August. Wahoo is usually caught around the rocky points and islands, where they swim alone or in small schools. Fishermen consider it one of the ocean’s finest delicacies.

Snapper
The many species of snapper prefer a rocky bottom structure that provides baitfish and protection. The Cubera is the largest of the Pacific snappers, often going beyond 100 lbs. Snappers are tough fighters on light tackle and excellent eating as well.

Roosterfish
Available year ’round, but the best time from November-March around Papagayo Bay. An aggressive predator, the roosterfish is always an exciting catch, but they put up a tough battle.

Scroll back to top