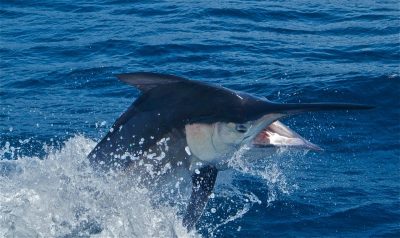 For black marlin fishing trips, Quepos or Guanacaste, Costa Rica, are two of the world’s top locations. One of the biggest black marlin catches of 2004 in Costa Rica was on WaveDancer, a 44-foot Jersey that was running fishing trips from Quepos at the time. (The boat moves north to Guanacaste after high season).

Captain Jesse Baletti was at the helm in March as the charter boat reached the waters of Veinte Seis about 23 miles west of the Quepos dock. Veinte Seis is a reef that is a local feeding ground for billfish headed north that time of year. For more info, see black marlin fishing trips on WaveDancer.

Five fishermen took turns on the rod after hooking up with a huge billfish about 10:30 AM. They fought the beast on a Penn International 30 with a 40-pound test until 9 PM before bringing it alongside for an official catch and release (which requires someone on the boat to touch the leader). It was estimated at 1,467 pounds, using the standard formula based on length and girth.